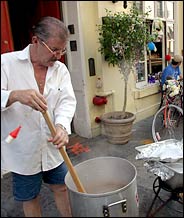 One of the key influences in my decision to become a journalist was Hurricane Katrina, the devastating disaster which hit the southern coast of America in 2005.  I’ve always seemed to encounter bad luck abroad; narrowly avoiding the Indian Ocean tsunami, getting robbed in Costa Rica, and getting caught up in a military coup in Thailand. But through no fault of my own, the flight I boarded to Louisiana arrived on the same day as the deadly hurricane which killed more than 1,800 people and caused $81 billion (£52.5bn) worth of damage.

Although I was initially diverted to Texas, I travelled back into Louisiana and spent a month witnessing the damage, devastation and heart-break firsthand. A fortnight into my stay I finally went into New Orleans itself. As I neared the outskirts of the city, the first signs of the disaster were clear to see. Huge swathes of trees had been stripped bare of their leaves by the strong winds. In the outer suburbs there are mountains of broken refrigerators, televisions and other electronic goods left on the street corner. In every other neighbourhood there was a gap where a house once stood. One resident had painted a warning to potential looters on the front of his house. It read: “01/09 Don’t try. I am sleeping inside with a big dog, an ugly woman, two shotguns and a clawhammer.” A second sign, below read: “04/09 Still here. Woman left Friday. Cooking a pot of dog gumbo.” It was nice to see some people hadn’t lost their sense of humour despite the hurricane.

In the heart of the city the streets were empty and eerily silent. The muggy air was filled with flies and the stench of rotting uncollected rubbish, which is piled high on every corner. Soldiers lounged about in a makeshift camp they had set up in the grounds of a deserted university campus. Several cars were crushed flat by brickwork that had fallen from an office towerblock. A dirty line was still visible on the walls of the boarded-up buildings, more than 8ft high – marking how high the water reached before it receded. In the late afternoon, close to the French Quarter, I found a bar and restaurant called Alex Patout’s that was still open. The owner Finnis Shelnutt (pictured above – I’m in the background wearing a blue t-shirt), had braved the storm and every evening he cooked jambalaya in a big metal pot for up to 100 servicemen and women carrying out the clean-up operation in the city. A homeless man, who introduced himself as Dr Love, arrived on a bicycle wearing a torn vest covered in Biblical proverbs. Some journalists gave him some of their pizza, and he sat down to talk with us before falling asleep in his chair.

I was joined by two Belgian journalists reporting on the hurricane for a newspaper in Brussels. They were amazed by the generosity they had encountered. When they were thirsty, a shopkeeper whose store had been destroyed gave them bottles of Coke but refused to take their money. Other residents they had interviewed had offered them food despite the fact that they had lost everything. The hurricane had ruined peoples’ homes but it hadn’t destroyed their spirit. It was heart-warming to hear and witness people’s kindness despite the tragedy, and to see solidarity and humanity at its best.